You are here: Home / News / Richmond ALUM and Professor of the summer British Fantasy class shortlisted... 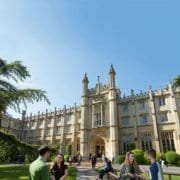 The novel Central Station by Lavie Tidhar, a Richmond alum and former HISTORY major, has been shortlisted for the prestigious Arthur C. Clarke Award. The annual award is given for the best science fiction novel first published in the United Kingdom in the previous year. Central Station, an international and interstellar epic set at a space station in Tel Aviv, has received numerous accolades, including “Best of” selections by the Guardian, National Public Radio, Amazon, Barnes & Noble, Kirkus, Locus,  and io9.com. Bestselling author Warren Ellis (Gun Machine) described the novel as “all of science fiction distilled into a single book.” Lavie has previously received the World Fantasy and British Fantasy Awards. He will be teaching Richmond’s own British Fantasy class this summer.

In Memory of Sandy Petrek

The Wellbeing Research Centre’s round-table discussion on the environment...
Scroll to top